The most revered Khenpo Karpo Rinpoche was born in Zhongmey, Lhuntse District, in eastern Bhutan, on the 10th day of the 4th Month (known as the Day of Guru Rinpoche) of the Fire-Rat Year, corresponding to 10th May 1934. Rinpoche is one of the masters of the present 5th King of Bhutan. At the age of 12, he joined Sherphu Gonpa and began his preliminary traditional studies such as reading practice of the Vajrachedika text and memorization of ritual prayers. Over the years, Rinpoche has been meditating and practicing Buddha’s teaching. As desired by his root-masters H.H. Dudjom Rinpoche and H.H. Dzogchen Polo Khenpo Rinpoche, Ven. Khenpo Karpo Rinpoche founded Pelphu Retreat Centre at his native land of Zhognmey in Lhuntse District in 1992. In order to fulfill the Buddha and many great Dzogchen masters and terton’s prophesies as well as to benefit all sentient beings, Rinpoche deeply felt the need to build this giant Guru Statue to bring peace and prosperity to the world. He started planning and proposed to the present King in the year of 2002. The King gave an explicit approval and showed his full support to such a magnanimous act undertaken for the public good. Thereafter, Ven. Khenpo Karpo Rinpoche founded the Druk Odiyana Foundation in 2004 to facilitate the construction of the Guru Statue. In the meanwhile, Rinpoche has been raising the fund within the Kingdom of Bhutan. With the suggestions and helps from H.E. Dzongsar Khyentse Rinpoche, for the first time in the year of 2007, Ven. Khenpo Karpo Rinpoche started to travel all over the world for this peace project in order to expedite the funding progress.

Khenpo Karpo Rinpoche and the 4th King and Queens of Bhutan

Khenpo Karpo Rinpoche and the 5th King of Bhutan

Year 1957
The Ven. Khenpo Karpo Rinpoche received The Refuge Vow from H.H. Dudjom Rinpoche in India and practiced under his guidance. He attended upon H.H. for 31 years, during which he received the complete Buddhist teachings covering empowerments, reading transmissions and instructions of the Nyingma, including Kama and Terma.

Year 1958-1960
Ven. Khenpo Karpo Rinpoche completed the three years three months retreat of the Outer Mahayoga, Inner Anuyoga, and the Secret Atiyoga of the Dzogpachenpo (The Great Perfection) tradition and attained a high level of realisation under the guidance of H.H. Dudjom Rinpoche.

Year 1970
The Ven. Khenpo Karpo Rinpoche attained the title “Khenpo” and became the teacher who gives the highest level of Buddhist teachings.

Being a close disciple of many eminent masters, the Ven. Khenpo Karpo Rinpoche was able to receive their quintessential, precepts, instructions, and their mind-treasures. He was introduced to the direct experience of Dzogchen nature of mind by initiating into the essential teachings of the Semde (Series on the Mind), the Longde (Series on Space) and the Menngagde (Series of Secret Instruction). In the masterwork called Dudjom Sungbum, it mentioned the Ven. Khenpo Karpo is one of Dudjom Rinpoche’s heart-sons who has been empowered with the authority to confer empowerment, initiation and meditational instruction on his lineage teachings. H.H. Dudjom Rinpoche also made a public speech stating that, “the teachings and blessings received from Khenpo Karpo is non-dual and non-distinctive from what you received from me.” The Ven. Khenpo Karpo Rinpoche has been undertaking many meditative retreats in nearly every sacred place in Nepal and Bhutan for over 40 years. He nobly sustains this great responsibility at the advanced age to build the prophesied Guru Statue for the benefit of all sentient beings. 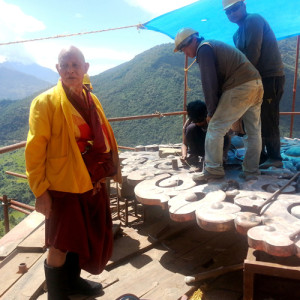 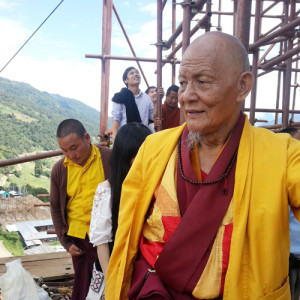 The over 80-year-old Ven. Khenpo Karpo Rinpoche has been travelling world widely for many years to raise the fund for this gigantic Guru Statue, which displays all the qualities in his tireless and compassionate work for others. Besides, he frequently commutes between the capital city Thimphu and the project site Takila to ensure the construction work through inspection and supervision. It is to be noted that the journey from Thimphu to Takila takes up to 16 hours of bumpy ride. The noble deed of his dedication and determined efforts in taking forward the work of the peace project is profoundly venerated. Today, Ven. Khenpo Karpo is renowned and respected by all sections of society as the most experienced meditation master in Bhutan on Dudjom Tersar Lineages of Nyingma tradition.