The New Treasures of Dudjom (Dudjom Tersar) – “Pudri Rekpung”, The Razor That Destroys at a Touch

Vajrakilaya (Tib. Dorje Phurba), is a wisdom forded through the power of one-pointed concentration which is a concerted mindfulness of the unity and interdependence of all Dharmas. This is the mind treasure of the essential daily practice related to the terma cycle of “Pudri Rekpung” revealed by the great Terton H.H. Dudjom Rinpoche (Dudjom Jigdral Yeshe Dorje).

The Razor That Destroys at a Touch is famous for being the most powerful practice for removing obstacles, destroying the forces hostile to compassion and purifying the spiritual pollution. This razor can destroy any affliction, negativity, conceptualisation, doubt, hesitation, and negative emotion. There is nothing, as far as mental negativity of obscuration, cannot be destroyed by this razor.

Vajrakilaya, meaning the ‘Dagger of indestructible Reality’, is one of the Eight Herukas or wrathful meditational deities of the Nyingma Mahayoga transmissions. Pudri Rekpung is the precious teaching of Nyingmapa with particular emphasis on the New Treasures of Dudjom. This particular treasure, The Razor that Destroys at a Touch: Vanquishing the Legions of Mara in Battle, was not widely disseminated by Padmasambhava. Rather, he gave the transmission solely to his heart consort, Dakini Yeshe Tsogyal, whose primary meditation deity was Vajrakilaya. Receiving it, she did not impart the teachings to anyone, but hid them by placing the seal of her command in the heart of  Padmasambhava’s disciple

While H.H. Dudjom Rinpoche was meditating in Paro Taktsang, the Dakini Yeshe Tsogyal appeared to him, then smiled and said, “this vajra belonged to the Padmasambhava, it was used to subdue the demons. I received this vajra from the Padmasambhava and now I am handing it over to you to benefit all the sentient beings.” H.H. Dudjom Rinpoche was transmitted with the empowerments, oral transmission and the instructions for this practice immediately when he received this vajra. The memory of past Padmasambhava and Yeshe Tsogyal appeared in his mind. The complete dharma lineage is then prolonged.

In today’s difficult times, it is vital to receive the refuge and practice in this supreme activity deity of all Buddhas. The awesome and wrathful manifestation of this empty yet apparent deity assists practitioners in clearing the obstructions to realisation.

The practice and empowerment of Phurba, i.e. Vajrakilaya, is mainly to cut through all sorts of obstacles and obstructions in body, mind and speech, thereby realizing the nature of reality. With this understanding and awareness, the practice of Vajrakilaya helps practitioners to gradually or immediately remove all obstacles on the path of reaching Buddhahood, and all that are required for practitioners to remain in their practice will be spontaneously fulfilled. It is the only deity for all practitioners to rely on for removing all worldly and non-worldly obstructions. When dakini Yeshe Tsogyal requested guidance from Guru Padmasambhava, he replied: “If one relies on Phurba, one would receive virtues such as wealth, longevity, well-being, fortune, and so forth.” To sum up, if one practices Phurba, one would be free from diseases and calamities, filled with joy and happiness, all wishes are spontaneously fulfilled in this lifetime. One would then attain the level of Vajrakilaya without effort in the next lifetime. Dedicating the practice to all sentient beings extends this benefit and enhances world peace and prosperity. The wrathful heruka Vajrakilaya is the yidam deity inseparable from bliss and emptiness of all the Buddhas of the three times and it embodies the enlightened activity of all the Buddhas and Bodhisattvas. 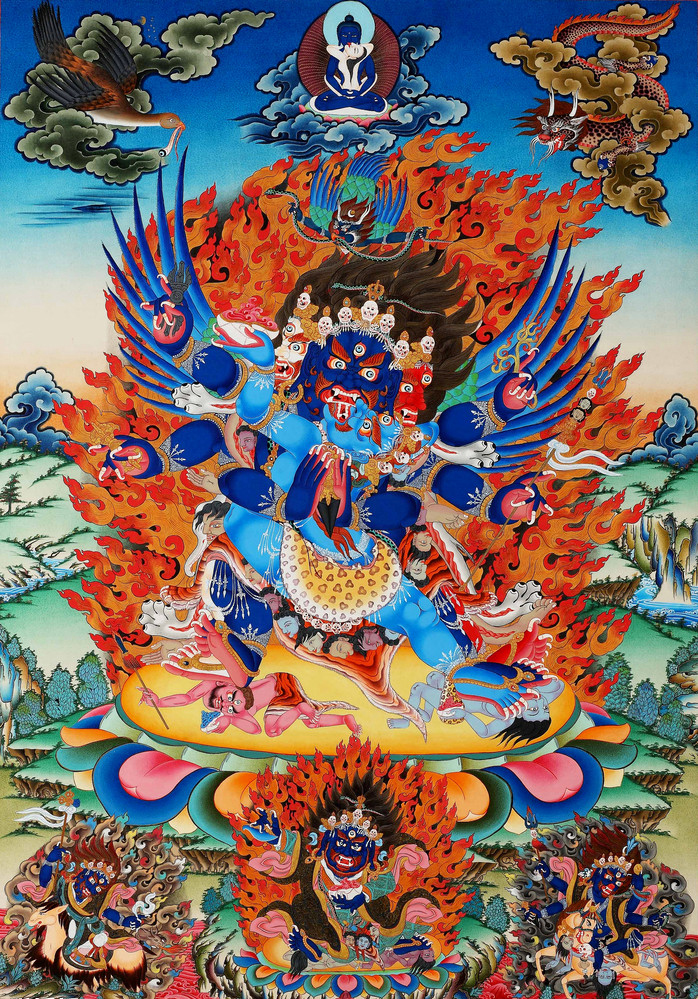 His two main hands embrace his consort, and hold the magic Phurba Dagger. The lower blade of his Phurba represents method or skilful means, and its upper handle represents wisdom. The triple-edged nature of the blade symbolises the severance of the three root delusions of hatred, ignorance, and desirous attachment, and its triangular single-pointed shape symbolises the realisation of emptiness. Vajrakilaya’s other right hands hold five- and nine-pronged vajras, representing his power and indestructibility. His other left hands hold a flaming triple wishful-filling jewel, and a trident which symbolises his abandonment of the imprints of the delusions of the three realms.

He stands in pratyalidha posture as he leans towards the right upon a golden sun disc and a multi-coloured lotus. With his two right feet he tramples upon the forehead and back of the Rudra (Mahadeva), who lies face down upon the sun disc. And with his two left feet he tramples upon the breasts of Rudrani (Mahadevi), who lies on her back facing upwards. These two figures represent the two extremes of samsara and nirvana, and they both hold the attributes of a skull-cup and a curved knife.

He wears an elephant skin across his back, showing that he has abandoned the ignorance of self-grasping. A human skin is hung diagonally across the front of his body, indicating his conquest of the self-cherishing ego. His loin cloth is made of tiger skin, symbolising his abandonment of hatred, and he wears a long necklace of freshly severed human heads, representing his abandonment of ordinary appearances and conceptions.

Vajrakilaya is one of the eight deities of Kagye and the primary meditational deity of the Nyingma tradition of Vajrayana Buddhism. The practice is undertaken and accomplished by the majority of its great realised masters. A compassionate expression of the Buddha nature, Vajrakilaya is the wrathful manifestation of Vajrasattva, arising to purify the source of all sufferings, which is ignorance. It perfects appearance and existence as the mandala of the magical net.