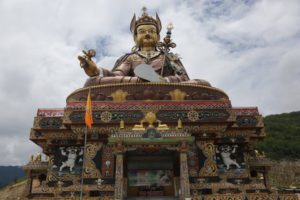 The Statue of Guru Padmasambhava, in form of Guru Nangsi Zilnoen, symbolizes the subjugation of negative forces. It is built seated on a lotus bed on the lion throne (Sengthri). The statue stand 157 feet tall including a 30 foot high lion throne and 17 foot high lotus seat.

The lion throne is 35 feet wide, measuring an area of about 9,500 square feet and it houses two main Lhakhangs (Temple), with seating capacity of 650 to 700 people for religious gatherings and blessings. First Lhakhang is known as Gangzag Nyenjud Lhakhang and the second one is Rigzin Dagjud Lhakhang. The vertical connection with staircases from either side leads to the terrace of the Sengthri at the base of the lotus seat. The terrace serve as an inner circumambulation path. The lotus seat also houses a smaller temple, which is known as the Gyalwa Gonjud Lhakhang.

On four sides, there are additional shrines with an open balcony. The Lhakhang can be accessed from three directions, through covered porches adorned with traditional architectural designs. A wide path around the base of the lion throne serve as a space for circumambulation. Eight stupas are built around the complex, marking the four corners of the site and four main directions. With all these in place, the entire complex symbolically represent a Mandala with the Guru in the center.

The Dharani (Zung) and other precious relics and religious objects, together with 100,000 Guru Dewa statues (each 4 inches tall), are placed inside the statue as dZhung .

The face of the guru statue measure 14 feet high and is made of copper adorned with pure gold. The statue represent the Three Bodies of the Buddha, symbolizing the past, the present and the future Buddha.