The Druk Odiyana Foundation was founded by Khenpo Karpo Rinpoche in 2004. The foundation is a non-profit organization registered under the Religious Organizations Act 2007 of the Kingdom of Bhutan.  The foundation is based in Thimphu with a small Project Office at Takila, Lhuentse, Bhutan.

As per the Articles of Incorporation of the Foundation under the Religious Organizations Act 2007, Article III states the overall goal of the Foundation which is ‘to uphold and continue the transmission of sacred tradition of Guru Padmasambhava as the Guardian of all Sentient Beings’.

The primary objective and purpose of the Foundation was to build the world’s largest statue of Guru Nangsi-Zilnoen (157 feet) at Takila, Lhuentse as per the prophecies of Great Dzogchen Masters in the past to bring peace, security and prosperity in the world and to benefit all sentient beings.

The Article III of the Articles of Incorporation of the Foundation provides for undertaking the following broad activities in support of the above goal and objective: 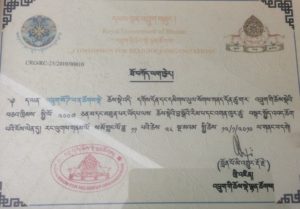 Therefore, the long term objective and purpose of the foundation is to facilitate and support the maintenance of this historic religious edifice, 157-feet Guru Nangsi-Zilnoen statue and various temples within the statue along with other religious centers/establishments for the promotion of spiritual well-being and peaceful coexistence of all the peoples of the world and to ‘uphold and continue the transmission of sacred tradition and teachings of Guru Rinpoche to all sentient beings.

The Foundation as per Article X of the Articles of Incorporation is managed by the Board of Directors supported by a Secretariat. Ven. Khenpo Karpo is the Founder and currently the Board is chaired by Dorji Lopen Rinzin Jatsho of Ugyen Do-ngak Yoesel Chholing Monastery at Takila. Following are members of the Board:

Concurrently with the construction of Guru Statue, Khenpo Karpo Rinpoche begin to construct and establish Ugyen Dongak Yoesel Chholing complex which has a Shedra (Buddhist College) and a Dratshang (Monastery). The Shedra is headed by Khenpo Dawa Penjor and currently there are about 100 monks enrolled in it and the gross enrolment will gradually increase to 300 when the Shedra is fully developed to offering full course on Buddhist studies. 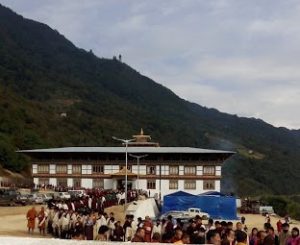 The Dratshang is headed by Dorji Lopen Rinzin Jamtsho. The Dratshang has about 20 monks to take care of the performance of religious ceremonies and offerings in the different temples within the Guru Statue. The monks from the monastery also serve and cater to the needs of the local communities to conduct various prayer ceremonies and rites both at their individual homes as well as in the community temples in the villages in the whole of Lhuentse district.

Bara Lhakhang is an old temple complex contributed by the community to Khenpo Karpo Rinpoche in 2002. Khenpo Karpo Rinpoche decided to establish a nunnery at the complex and few buildings were constructed accordingly. Till 2015, the complex was used to accommodate the monks before the completion of the Shedra and Dratshang building at Ugyen Dongak Yoesel Chholing in Takila. The buildings at Bara Lhakhang are now being reconstructed as nunnery to house around 30 nuns. 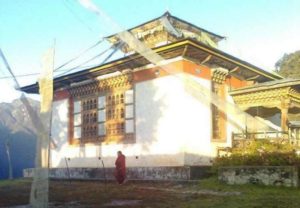